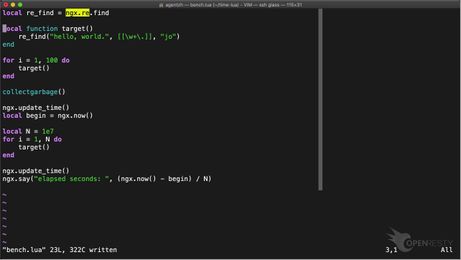 Yes, sure. OpenResty is currently employing a "tick-tock" release model. Each "tock" release (usually) upgrades the bundled NGINX core to the latest mainline release from the official NGINX team, followed by one ore more "tick" releases focusing on OpenResty's own features and enhancements without upgrading the NGINX core.

How often does OpenResty make a new release?

We are trying to make a new release of OpenResty every couple of months. It may sometimes take longer because this project is mainly based on volunteers.

How should I report a problem?

Whenever you run into a problem, you are encouraged to report to the openresty-en (English) mailing list or the openresty (Chinese) mailing list (depending on your language). See the Community page for more details. But please don't cross-post.

You are highly recommended to provide as much details as possible while reporting a problem, for example,

The more details you provide, the more likely and faster we can help you out. Most of the time, you will find your own mistakes while minimizing your problematic example or looking at your Nginx error log files.

If you are absolutely certain that you have run into a real bug, then you are encouraged to file a ticket in the corresponding project's GitHub Issues page. For example, the GitHub Issues page for the ngx_lua component is https://github.com/openresty/lua-nginx-module/issues. The GitHub issues pages for OpenResty's components are all considered English-only. Never use other languages like Chinese there. It is still fine, however, to just send a mail to one of the mailing lists mentioned above; but again, please do not cross-post.

Lua 5.2+ are incompatible with Lua 5.1 on both the C API land and the Lua land (including various language semantics). If as you said there are quite a few people already using ngx_lua + Lua 5.1, then linking against Lua 5.2+ will probably break these people's existing Lua code. Lua 5.2+ are essentially incompatible different languages.

Supporting Lua 5.2+ requires nontrivial architectural changes in ngx_lua's basic infrastructure. The most troublesome thing is the quite different "environments" model in Lua 5.2+. At this point, we would hold back adding support for Lua 5.2+ to ngx_lua. Also, we do not want to create confusions and incompatibilities on the Lua land for applications running atop ngx_lua, as well as all the existing lua-resty-* libraries written in the Lua 5.1 language.

We believe it is better to stick with one Lua language in ngx_lua. Chasing the Lua language's version number has not many practical technical merits (if there were some political ones).

Yes sure. LuaJIT 2.0.x is always supported in OpenResty though LuaJIT 2.1+ is highly recommended.

Why does OpenResty use LuaJIT 2.1 by default?

As of this writing, LuaJIT 2.1 is still officially "beta" but OpenResty is using LuaJIT 2.1 by default and encourages use of it in production because

We highly recommend LuaJIT 2.1 because we really need speed in OpenResty though you always have the freedom to use LuaJIT 2.0.x or even the standard Lua 5.1 interpreter in OpenResty instead.

Why can't I use duplicate configuration directives?

Most of the ngx_lua module's configuration directives do not allow duplication in the same context. For example, the following nginx.conf snippet

will yield the following error while starting nginx:

People may want to use duplicate directives to split complicated Lua code base into multiple separate .lua files. This is not allowed and it must be inefficient even if it were to be implemented in ngx_lua.

The recommended way to organize your Lua code base is to use Lua's own module mechanism:

You can put your unrelated Lua code into separate Lua module files, for example,

And finally, just require them in the entry point like this:

You will need to add the path of your Lua modules to Lua's module search paths, for instance,

in the http {} block in your nginx.conf.

You can take a look at OpenResty's standard Lua libraries for real-world examples, like openresty/lua-resty-redis.

Use of Lua's native module mechanism is also very efficient. Thanks to the built-in caching mechanism in Lua's built-in function require() (via the global package.loaded table anchored in the Lua registry, thus being shared by the whole Lua VM).

Can I use custom loggers in Lua?

Yes, sure. You have multiple options:

Why am I seeing the "lua tcp socket connect timed out" error?

The error happens when the connect operation to the backend times out. The backend can be Redis, Memcached, MySQL, or any other thing you are currently using. This error log message is generated by the ngx_lua module's automatic error logger for cosockets. If you already handle all the cosocket errors properly in your own Lua code, then you can suppress the automatic logger by turning off the lua_socket_log_errors in your ngnx.conf:

The cause of the connect timeout errors can be complicated but generally falls into the following categories:

You can try the following to address the issue:

Why am I always getting 0 from getreusedtimes() or get_reused_times() calls?

Can I set timeout threshold on subrequests?

Yes, you can, but not directly via an option or parameter on the subrequest calls like ngx.location.capture and echo_subrequest. Rather, you should specify the timeout configurations in the location targeted by your subrequest. For example,

Here you specify all the timeout thresholds provided by the ngx_proxy module in the (internal) location (= /sub) accessed by your subrequest.

Can I access remote URLs via ngx.location.capture or alike?

Yes, but not directly. The subrequest API targets nginx's "locations". So you need a dedicated location (be it "internal" or not) and configure the standard ngx_proxy module there.

Alternatively, you may consider using one of the lua-resty-http* libraries contributed by the community. To name a few:

Contributing to this FAQ

This FAQ document is hosted on GitHub and periodically updated to the openresty.org site:

You can edit the faq.md file in the repository above and create pull requests so that I can incorporate your patches. Install OpenResty on CentOS 8 via dnf Write Your Own Lua Modules for OpenResty Applications